What Would YOU Do?

In an intelligent, careful adaptation of the writings of Auschwitz victim Irène Némirovsky, Suite Française examines the human response, on an individual level, to occupation.

A small northern French town is thrown into panic with the arrival of the German army in the early years of the second World War. The impending interactions between the 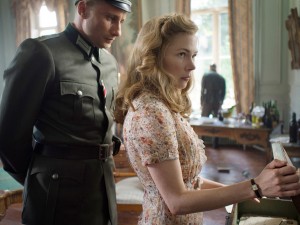 occupiers and the occupied result in expected hostility, but not always in the way one might think.

Suite Française allows the viewer to see the characters in a new, often unexpected light, rather than relying upon stereotypes to avoid melodrama.

Our thanks to this movie’s sponsor

Where you’ll find everything to suit your healthy lifestyle, including the freshest organic produce. Don’t forget to visit the Deli Lama, serving vegetarian breakfast, lunch, dinner and deserts. The Deli Lama caters too!

This entry was posted in Movies. Bookmark the permalink.